If you are a fan of the match-3 puzzle genre, then I could be certain that you have heard of Gardenscapes mod apk and its sequel, Homescapes. These games were developed and released by Playrix, a company well-known in the gaming industry for its unique and innovative products. Within a few years, both versions have reached several hundred million downloads, with total sales of hundreds of millions of dollars. So, what is it that makes such astonishing popularity? Check out the review below for more thoughts about Gardenscapes, and continue with our Homescapes article later.

The Quest for Redecoration One day, you receive news that a strange billionaire has left you a huge mansion. However, this house seems to have been uninhabited for a long time, and the first thing you need to do is clean up everything. While being extremely confused, you suddenly receive a help offer from Austin, the Butler at this mansion. Together, the two immediately embarked on cleaning up the house, and their first destination, undoubtedly, is the long-abandoned garden.

Become a Gardenista Is Easy

As I mentioned above, Gardenscapes apk is the predecessor to Homescapes, and they have similar gameplay. However, while Homescapes has diverse and unique powerup combinations, the system in Gardenscapes is much simpler. All the powerups in this game follow the same concept: a big explosion in a square shape, except for the Rainbow Blast, which works like color-exclusive dynamite. Furthermore, powers cannot be combined as in its sequel, limiting the ability to complete the level.

Gardenscapes apk is designed according to an existing story, and the player's task is to collect stars to unlock more dialogues and upgrades for the garden. This is one of the game's biggest charms, as it combines puzzle and design elements into one. You can personalize the entire garden or look for impressive designs online and imitate them. Personally, I recommend doing everything yourself, because it's a lot more fun than following someone else's instructions. 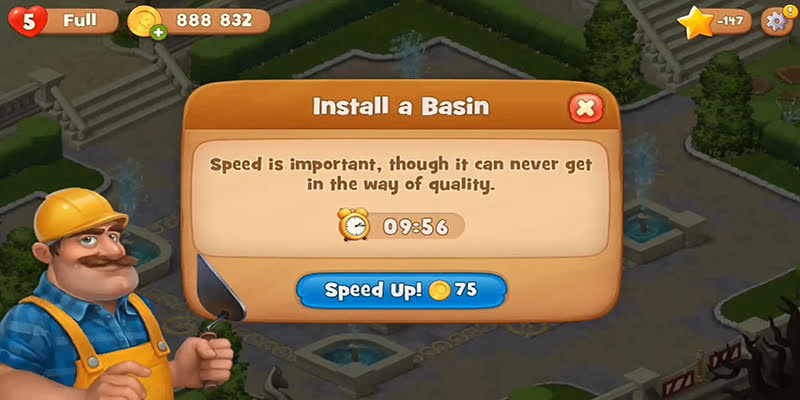 By the end of 2020, Gardenscapes has over 7,000 levels for players to play, with about 15 new levels being released every week. Yes, you heard it correctly. With 7 thousand maps, assuming you complete at least 20 of them every day, you have to spend a whole year of continuous play to complete everything in the game... up to December 2020. It can be said that Playrix has developed a genuinely addictive series with infinite growth potential.

However, there is one minus point of this match-3 puzzle genre that I really don't like: the limited number of plays. As the game progresses, the levels get more challenging and random, making it impossible to finish a map after just one play. Furthermore, buying extra lives or powerups is also extremely expensive, and they may not be worth wasting money. Perhaps, completing the entire game in one or two years is just a fantasy.

Too Cute to Handle 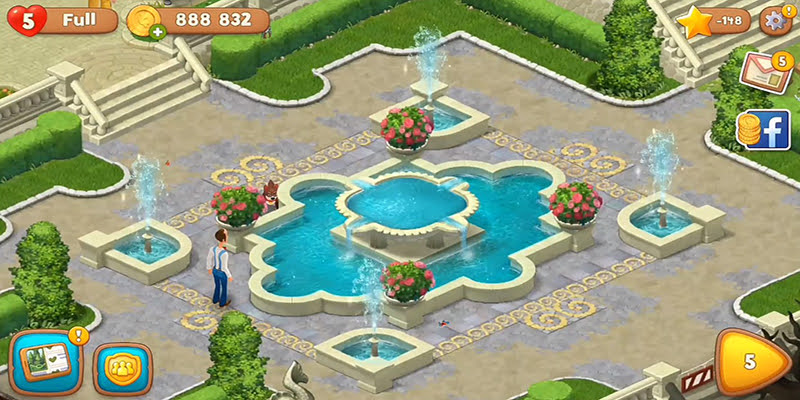 The graphics of Gardenscapes can only be described using a single word: Cute. All details in the game are built on a 3D platform, with the extremely harmonious design of the colors. Every small animation in the game is carefully constructed, like the butterfly flapping its wings, or Austin scratching his head. This is the defining feature of Playrix games, giving players the feeling of relaxation after stressful working hours.

Like any game, the grinding process could be very tedious. However, you cannot unlock more storylines without stars, and you cannot get more stars without completing a map. This is no longer your concern anymore. With Gardenscapes MOD APK download, you will receive unlimited stars to buy anything you want and unlock all the dialogues in the game. Feel free to decorate the garden in your own style!

Gardenscapes
Rate this app
Reviews are public and editable. Past edits are visible to the developer and users unless you delete your review altogether.
0★
0 total
5 ★
4 ★
3 ★
2 ★
1 ★
We gather comments to provide users with the latest information.
Sorry, no results found.